The Sustainable Road to Prosperity in Latin America 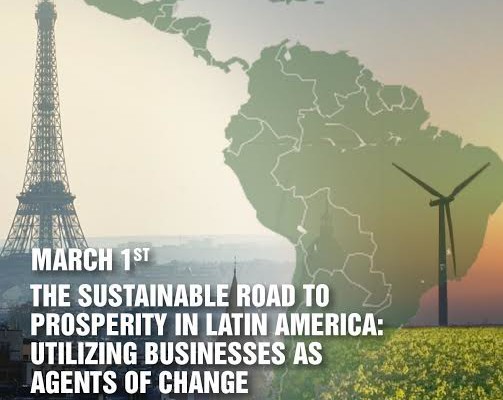 Businesses as agents of change.
Sustainability for a prosperous future.

The growing interest in clean energy sector of Latin America is reflected in the significant growth in investments, and it is supported by price advantages and signs of an improved framework for renewable energy projects.

In view of this untapped potential in the Latin American region, ExpoPlaza Latina (EPL) in partnership with GLOBE 2016 will host a seminar with keynote speakers in relation to sustainable practices and the thriving clean tech industry, followed by a business networking session with government and consular officials.

Latin American consulates and the BC government will present a summary of their initiatives and exclusive business opportunities arising from the challenge of meeting the commitment signed under the United Nations General Assembly resolution "Transforming our world: the 2030 Agenda for Sustainable Development" (Paris 2015).

This is a unique chance. Join the conversation. Come to ExpoPlaza Latina at GLOBE 2016!

After the Kyoto Protocol, the Paris Agreement represents a remarkable achievement towards mitigating climate change emissions by limiting temperature increase to 1.5 °C with the commitment of 195 nations to a common cause, including the largest emitters like China and the US. Even though the production of greenhouse gas emissions by Latin America is only 12.5%, Latin American countries played an active role at the talks.

The agreement drives efforts to create a transition to the use of clean energy, and at present, Latin America is a well-positioned region for clean energy investment. According to the 2015 Global Climatescope raking, Brazil, Chile, Mexico and Uruguay are in the top 10 group of countries for their ability to attract investments for clean energy projects. With largest reserves of arable land and fresh water, the largest carbon sink, and a rich biodiversity, Latin America is a strategic point for this type of investments, and the participation of the region can have a significant impact on addressing climate change.

Some Latin American cities have already adopted various climate solutions before the agreement, showing signs of higher commitment. For instances, several urban strategies were recognized for their impressive reductions in pollution: a mass-transit bus system in Bogota, Colombia; energy-efficiency measures for construction in Mexico City; building bus routes in Rio de Janeiro, Brazil; or the replacement of car lanes with bus-only lanes in Buenos Aires, Argentina.

In addition, there was an improvement in creating the regulatory framework necessary for clean energy business to thrive. Since Latin American and the Caribbean nations are aware of their vulnerability to the impacts of dangerously high temperatures on their development and the well-being of people, local governments have been introducing policies with focus on the use of clean energy, the protection of biodiversity, and the development of sustainable cities and transport systems.

The pledges and current measures encourage innovation in the private sector and create attractive opportunities for businesses, especially for renewable-energy companies and their investors, bringing benefits while paving the way for a low-carbon, sustainable future.

Our Partners and Sponsors If you are an EPL Attendee you will obtain 40% OFF of the Expo Only Pass at GLOBE 2016 Series: from $45 to $27.
Some great speakers and activities for the Expo theatre and other spots on the Expo floor.
Once you have your EPL ticket contact us and we will send you a non transferable code: Conference Pricing