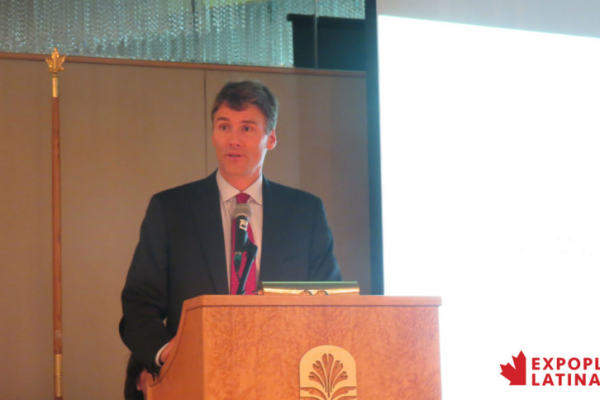 Consular and local officials, business professionals and community members get together to join the conversation about sustainability after the Paris Agreement 2015

VANCOUVER, BC. Mar. 11, 2016. – The ExpoPlaza Latina (EPL) seminar “The Sustainable Road to Prosperity in Latin America” took place on March 1, 2016 at the Pan Pacific Hotel being the mayor Latin American representative during the GLOBE 2016 week, the longest-running sustainability conference in North America.

Organized by Latincouver Business and Cultural Society, this event featured a seminar with four captivating experts in renewable energies and sustainable solutions in Canada and Latin America, followed by a networking session with the special participation of the BC Government and Latin American consulates.

Vancouver Mayor Gregor Robertson and the City Councillor Andrea Reimer officially kick-started the event asserting that, with the goal to be the greenest city in the world by 2020, the City of Vancouver sees “many opportunities and similar thinking about green growth and innovation in Latin America”. In the closing networking session, the BC Government and consular officials from Brazil, Colombia, Costa Rica, Ecuador, El Salvador and Mexico invited people to consider business opportunities in their regions. While the Clean Technology Senior Manager Harbs Bains described the booming clean technology industry in British Columbia, the Latin American consulates highlighted the fertile ground for investments in their growing economies.

ExpoPlaza Latina seminar went beyond stating the current state of affairs in climate change and created a meeting space for institutions to gain new insights and join efforts for a prosperous future. Get ready to see more seminars that make a difference. See pictures of this EPL event on Flickr.

ExpoPlaza Latina is a series of seminars created by Latincouver Business and Cultural Society intended to educate people and promote business between British Columbia and Latin America. For more information, please contact Paola Murillo at paolavm@latincouver.ca.