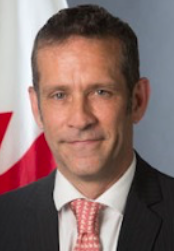 Marcel Lebleu is a career foreign service officer who started with the Department of External Affairs in 1987. He joined the Trade Commissioner Service after having graduated in economics(B.Sc.) from Université de Montréal/University of Massachusetts.  He is a Certified International Trade Professional (CITP) and his experience representing Canada abroad spans three continents. He has served abroad in Cameroon, Costa Rica, in Argentina as Commercial Counsellor/Senior Trade Commissioner(1999-2003), and Spain as Commercial Counsellor/Senior Trade Commissioner(2003-2007).

From 2007-2011, he was Director and Senior Trade Commissioner of the Quebec Regional office (including Nunavut) of the Department of Foreign Affairs and International Trade of Canada (now Global Affairs Canada).  In Ottawa, he held a number of senior positions at the corporate-level, including Director, Client Service and Strategic Integration(2011-2013) and Director General for Regional Trade Operations and Intergovernmental Affairs (2013-15).

Ambassador Lebleu was appointed as Canada’s Ambassador to Chile in 2015.