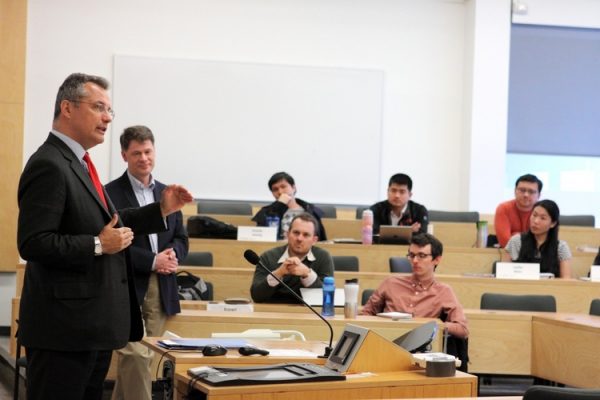 Between the plethora of non-stop flights to Asia and the millions of tonnes of cargo passing through the Port of Vancouver, there’s “no question” British Columbians prioritize trade with Asia over Latin America, according to Nicolas Lloreda.

Colombia’s ambassador to Canada believes, however, the Pacific Alliance – a trading bloc made up of Chile, Colombia, Mexico and Peru – is shifting that focus from east to south.

“Those four countries have their own trade agreement, which pretty much makes them a common market,” Lloreda told Business in Vancouver, while visiting the city in mid-October.

“We are getting more and more Canadian companies that are starting to use Colombia as a hub. They like the facility to do business, and they like the business culture and they appreciate the geographic location, which makes it ideal for them.”

Canada, which has free trade agreements with each of the alliance members, became the first non-Latin American country in 2012 to observe the trading bloc.

But aside from mostly mining interests from some B.C. firms, Lloreda acknowledged most of that investment is coming from Central and Atlantic Canada.

Measured by metric tonnes of cargo, Asian countries, including Japan, South Korea, India and Taiwan, accounted for six of the top 10 trading partners at the Port of Vancouver in 2015, according to the port authority’s annual financial report.

However, the federal government’s efforts to shift the economy toward the innovation sector should be a welcome change for Vancouver-Latin American business opportunities, according to Lloreda.

In September, Colombian tech startup Biko launched its cycling-marketing service in Vancouver – its first foray into a North American city.

Biko’s app logs the kilometres cyclists travel, which it then converts into free or discounted goods and services from local companies.

Vancouver, known for its separated bike lanes and growing cycling culture, makes for an ideal city to launch Biko, and Cuellar said local businesses have been receptive to the idea of drawing in cyclists through an app.

Red Truck Beer Co., the Nuba restaurant chain and the Vancouver Art Gallery are among the local groups to sign on.

Francisco Perello, president of the board of directors for the Latincouver non-profit organization, said that despite Biko’s entry into the market, Vancouver is still facing “missed opportunities” when building stronger economic links to Latin America.

“Trying to do new business in any country is difficult,” Perello said. “If you had people [who shared] a common background, and can guide you, and help you and point you in the right direction, I think that makes life easier.”